skip to main | skip to sidebar

Daily, I am overwhelmed by the Grace I have been given, hence the title of my blog. But for those in the know, this holds a dual meaning. I have had my share of troubles, yet at the end of the day, I know I have been given Grace by My Father. Additionally, my girl is my very own Grace. Today is one of the da 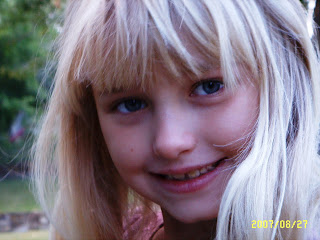 ys I'm overwhelmed by her. Sometimes the prospect of raising a third grader is more daunting than climbing Mt. Everest.

Our morning routine, which requires slightly more effort to get through than say, launching the space shuttle, is exhausting. There are moments when I seriously consider stepping outside to light up a Camel, and slam down a shot of vodka, but I resist, because I'm a "good momma". Instead, I yell. Not a good alternative, I know, but it happens. Hey, I'm a good momma, not a perfect one.

Part of the routine involves dunking her in the tub to get the stink washed off her, so her classmates will actually want to sit next to her. I refuse to let her be the smelly kid. Here's the problem: it's not as simple as a quick dunk. Not by a mile. The first ten minutes are spent lying in the water, soaking in the warmth. She keeps it warm by letting a trickle of straight hot water run the entire time, while draining the tub ever so slightly. She likes to do her part to conserve water, and as her mother, I couldn't be more proud. The next ten minutes are spent trying to talk to me from three rooms away. Just in case you're keeping track, that's 20 minutes, and nary a hint of soap has gotten anywhere near her little bod. And, I've counted to 10 five million times, and asked for some patience to get me through...

Thirty minutes later, she hauls her dripping wet tush out of the tub, goes upstairs, and like she did yesterday, for instance, lies down on the floor. I politely asked her to 'please get up and get dressed', and she said, "My head's too heavy, I can't lift it." Does anyone else smell burnt toast, because I feel a stroke coming on...

She finally got dressed, slammed a granola bar and a Capri-Sun, and we were out the door. I dropped her off at school, with lots of love and kisses, and headed back home, only to find...she hadn't drained the tub. She never does. I have asked her why she refuses to drain the tub when she's done, and she has explained that she's scared she might get sucked down the drain. Don't ask me why, but this drives momma up the wall faster than say, washing clean clothes. Yes, that one gets me. I wash, dry and fold the clothes. All she has to do is put them away. But for her, it works better to throw them on the floor, because when it comes time to clean, she can just toss them in the hamper, thereby avoiding putting them away altogether. She is a genius. So then, I find clothes, STILL FOLDED, mixed in with the dirties, and end up washing them again. See? More water conservation. I'm telling you, she is doing her part. It's a sacrifice, but she's does it for the greater good. Anyway...back to the un-drained tub.

Okay, I need a quick aside for a moment, then back to the point of the story we go. I feel this next part needs a preface. Before I had her, I thought I was reasonably intelligent. I could carry on a conversation on any number of topics, and never ended an argument with the phrase, "Yes-huh, nyah nyah nyah!!" Apparently, pregnancy hormones adversely affect both gray matter and maturity. Oh, and when you're a third grader, you know everything. As soon as a mother gives birth, her knowledge gradually decreases until she is a complete idiot. Now we can get back to the story.

During one of our conversations about the draining the tub, I decided to demonstrate the impossibility of her being sucked down the drain. I made a circle with my fingers, about the size of the drain, held it close to my eye (first mistake) and said, "There's no way any part of you could float down a drain this big!" Now remember, close to my eye...She proceeded to stick her little finger right through the circle and say, "See?! My finger fits!!" After 10 minutes, my eye stopped watering, and I regained my sight. I was tempted to reply, "Yeah, but your whole fist couldn't fit!" until the little voice in my head told me to shut up while I still had the gift of sight.

We have reached a compromise, however. She has agreed to drain the tub after she gets out of the tub, so as to avoid entirely the possibility of disappearing down the drain. Compromise is good. My eye still twitches every once in a while...
Posted by See Cody Write at 7:12 AM 1 comment: 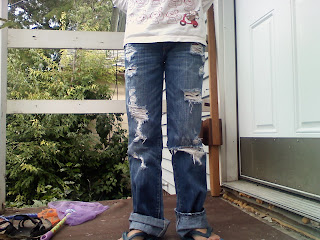 Having recently been inspired by my good friend, and realizing I'm basically the only person I know under the age of 60 who does not have a blog, I have decided to give it a try. Not that I really need one more thing to keep track of, but what the heck.

So, why Fashion Momma? As the mother of an 8 year old girl, I have begun to devote my life to dressing her in the trendiest threads, and keeping up on all that is fabulous in the world of an 8 year old girl. Thanks to my dear friend, who shall remain nameless, so as to avoid recrimination, I began to shop eBay a few months ago. Yes, I know, eBay has been around since the dawn of time, but it just never occurred to me to shop for my kiddo's clothes there. That is, until she declared that the ONLY jeans she would agree to wear had to have huge holes in the knees. Not the kind of holes you get after you've worn a pair of jeans until they're barely held together by a few threads. No, the kind of jeans which cost a small fortune. Yes, you must pay for this fashion. Now, I'm all for keeping up with style, but throwing down 80 smackers for a pair of shredded jeans just doesn't sit right with this momma. Call me crazy. Especially for an 8 year old. I recently went through her closet, and gave away an entire wardrobe of barely worn clothes, because she decided to grow a good 12 inches over the summer. So, I just cannot justify putting out cold hard cash in large amounts to keep her trendy for six months. But I digress.

I was faced with two choices: take out a third mortgage on the house in order to finance the new school wardrobe, or tell my daughter she couldn't have the fabulous torn, holey jeans. What's a momma to do? Talk to her friend. Now, to this friend's credit, she had mentioned (several times) that I should check out eBay, because I could find all the great kids' clothes at a fraction of the price. I just never did. Until three months ago, and life as we know it hasn't been the same since.

In a matter of days, I went from eBay virgin to crazy lady. Yes, I got carried away, and the 8, count 'em, 8 pairs of brand new, torn jeans hanging in the girl's closet are testament to my brief stint of insanity. Why in the world does my girl need 8 pairs of jeans?! Granted, if I went on a laundry strike, and trust me, I've given it serious thought, she would still have clean jeans for weeks. However, I don't see that happening anytime soon. So yes, we have the jeans, and life is good. They're a good 4 inches too long for her, but that is fine by me. Maybe we'll get 8 months' wear out of these before they find a new home...back on eBay.

So, the first installment. I promise, the next one will be more inspired.
Posted by See Cody Write at 7:49 AM 1 comment:

What's This All About?

It's a little bit of everything. Glimpses into our daily life, anecdotes about my successes and failures as a parent, reminiscences of my childhood and a recipe or two thrown in for good measure. Welcome to my happy little corner of the World.